I don’t want to look like the grand defender of the Obamas, I’m certainly not. But I do have to say, people have way too much time on their hands! Unless you live under a rock, the new History Channel mini series “The Bible” is being watched by everyone, everywhere, ever (except for me apparently), and it’s being implied that the actor who plays Satan looks like Barack Obama. Now I’m not saying he doesn’t (he kinda looks like a sickly, homeless version) but I can’t believe it’s considered news. I can see people sitting on their couches on Sunday and thinking “hey, that guy who plays Satan sort of looks like the President, hmm…” and that being the end of that. But no, the media must write countless articles about it, going as far as asking the creators of the series if it was deliberate (which is a pretty stupid question).

In fact, I’d like to take the time to defend the actor- Mohamen Mehdi Ouazanni- I bet he beat out a bunch of actors based on his acting chops and not his face. I can’t imagine the casting director was like, “That’s the guy who should play Satan! He can’t act for shit, but he looks like Obama! Sold!”.

And here’s my final thought on the series itself…. the guy who plays Jesus is pretty hot. And no, it’s not sacrilegious to say so because he isn’t actually Jesus Christ. 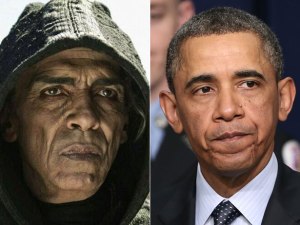