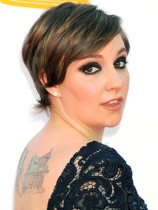 The new queen of indie is without a doubt Ms. Lena Dunham, and although most agree she’s very talented, I don’t completely agree she’s the ‘voice’ of my generation. Maybe it’s because I don’t get the indie movement, I don’t wear ill-fitted clothing, and I don’t listen to Tegan and Sara, but I find her interpretation of twenty-somethings a bit off.

Let’s start with the Pros. I love that she’s become a pioneer for the average looking woman, or at least the woman that doesn’t have the traditional shape. She took a page out of Jason Segel’s book, and wrote a leading role for herself (which would otherwise not have happened). For someone who is considered “normal” weight in the real world but “fat” for Hollywood, I appreciate her trying to break the mold. She also appears to be a genuine person, appears to be, I don’t like to make claims about people I don’t know personally- but I’m sure we could be friends.

The Cons. When I saw the trailer for her much anticipated show, “Girls”, I immediately set my DVR to record (knowing this was not going to be a show for my boyfriend to enjoy with me). The first episode was cool, she touched upon some very relevant issues like the struggles of getting a job and paying rent. However, she portrayed a person, who despite being in her mid 20’s, was very dependent on her parents-implying a privileged upbringing. I understand the age of dependancy has increased with the economy and all, but even those who still live with their parents tend to work and make some kind of living. Lena’s character was just an intern who lived with a roommate, but whose rent was being paid by her parents. She could have waitressed and still have been an intern- but at least there would be some effort to become independent.

That’s one issue I had with the show. The other, which has been the center of criticism, was the nudity. Like I said, I’m a normal girl, and I can appreciate a girl who is comfortable with her ‘normal’ body- I admire it even. I applauded the nudity in the first episode, then it was in the second, and then the third came….and that was about it for me. The point was made, it was refreshing, then it was enough.

I have not continued to watch the show, partially because of the nudity, but also because I don’t relate to the four female characters Lena has created. They all seem to come from upper middle-class families and each character is an extreme of something- Hannah is super indie, hipster, thinker, with odd clothing, Marnie is very vanilla, logical, a semi kill-joy, Jessa is the foreign one- which to the show means she’s the most interesting and the most promiscuous, and Shos is ultra nerdy, sheltered, and virginal. This is just my perception after a few episodes, hopefully these characters have evolved since. Nevertheless, I would probably still not get into it.

My twenties consisted of going to school, working very hard, and pushing to be 100% independent from anyone (mission accomplished by the way). I also didn’t find my twenties as promiscuous or weird- maybe they could have been, but I found dating and finding someone attractive a lot more difficult than “Girls” makes it.

I still applaud you Lena, you’re paving the way for normal people to get naked (in moderation though).

PS. I hope we can still be friends.

6 thoughts on “My Love/Hate Relationship with Lena Dunham”